Can Appreciative Inquiry Transform Cincinnati into a Strengths-Based City? 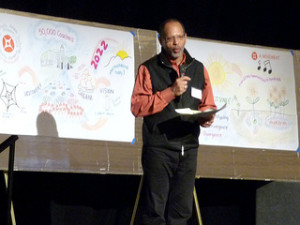 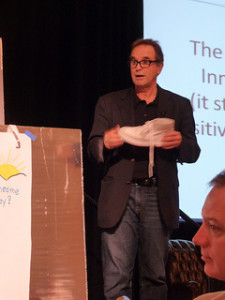 I didn’t think much about going to Cincinnati, to be honest with you.  I went because David Cooperrider (the creator of Appreciative Inquiry (AI) and a Zen-like figure in Organizational Development) is a vanguard in the organizational development world.  I went because I wanted to see Appreciative Inquiry on a large scale.  I did not go because I wanted to be moved to tears (or singing, as the case may be).  But Cincinnati moved me.  The AI process moved me…and I’ve been through it before.

For those of you dictionary lovers here is a recap of what the name means:

I’ve written before about the power of Appreciative Inquiry in the workplace.   When combined with a strengths assessment it can have an impact of creating new directions and engaging all employees. Peter Drucker famously said: “The task of leadership is to create an alignment of strengths…making a system’s weaknesses irrelevant.”   That might be able to work for a division of an organization or for a small one, but changing an entire city?  I wasn’t quite convinced. 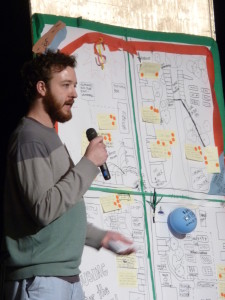 Appreciative Inquiry is a long process – three days and four steps.  Most organizations want a half day workshop to ‘fix’ their people.  I’ve written about the first half of the Cincinnati Summit here and the second half here.  If you want to get a good feeling for what a large scale AI summit is like without flying to the middle of the country, there’s your chance.  (Although it’s nice to actually get a chance to try the famous chili, if you get the opportunity.)

But why does AI work?  Perhaps it has something to do with Marcial Losada’s research on high performance teams.  He coded them on three factors of speech:  positive vs. negative; self vs. other and inquiry vs. advocacy.

“I showed unequivocally that a team interaction process is directly linked to performance data. I made sure that my performance data would get the attention of CEOs by using three performance criteria: profitability of the…team, customer satisfaction and 360 company evaluations.”

He found that the highest performing teams had a 6:1 ratio of positive–focused dialogue to negative (AI has questions that are unconditionally positive) and a 2:1 ratio of inquiry vs. advocacy conversation.  In fact, asking questions is the foundation of AI, rather than making statements.

What would it look like if we all asked more open-ended questions rather than making statements?  Could that happen on a city-wide scale?  During the summit I was inspired Cincinnati could actually be reformed as an entirely strengths-based city.  Cincinnati houses the world famous VIA Institute so the connection between the city and strengths is an obvious one.  In the final debrief, I actually grabbed a microphone and was inspired to sing “We are Cincinnati” to the tune of “We Are Family”.  Mercifully, there is no recording of that, although there is an article here.

So I ask you, dear reader, do you think it’s possible to create an entirely strengths-based city?  What would that look like?  We’d love to hear your thoughts.